Hearth & Blade is a campaign setting and homebrew ruleset for the first edition of the Pathfinder Roleplaying Game. Explore Yavmir, a frozen realm steeped in rich Slavic folklore. Delve into ancient ruins, acquaint yourself with strange creatures, and fight to survive in a world the gods have forsaken.

This book is not a complete roleplaying game in and of itself, but rather a collection of rule modifications and lore built on the chassis of the Pathfinder Roleplaying Game. The twin goals of Hearth & Blade are:

The Hearth & Blade core rulebook was initially released on August 31, 2022, after an 18 month open beta test.

Fifteen hundred years ago, mortals walked side-by-side with the gods as equals. However, in a great act of hubris, humanity incurred their wrath. Their cities and monuments were sundered to the ground and their world paralyzed by relentless snow. The sorcerer kings of this golden age were reduced to nothing, forced to relearn the art of the hearth and the blade. Although centuries have passed since this cataclysm, humanity still fights against starvation, war, and an endless winter. This is Yavmir — a world of ruin, a world without heroes.

Hearth & Blade is a low fantasy, post-apocalyptic campaign setting. Magic is rare, heroes few, and even food and good iron are hard to come by. Adventures, such as the one included in this book, often focus on protecting communities from bandits and beasts or scraping together enough coin to afford a warm night at the inn. This is all set against the backdrop of an endless winter that makes even the most routine trips between the scattered settlements of Yavmir potentially deadly.

The world of this campaign setting is inspired by Slavic folklore, drawing from early pagan, pre-Christian traditions. The monsters characters encounter, the deities they worship, and the dungeons they explore are all drawn from this rich mythology and its fairy tales - albeit with creative liberties taken on our part. As such, Yavmir is a world of witchcraft, of callous gods, of ghosts, of gleaming treasures, of fool’s errands, and of small blessings.

Through this book, we have strived to assemble a comprehensive atlas and encyclopedia for the Hearth & Blade campaign setting. Although designed for the Pathfinder Roleplaying Game, the chapters on lore and history can be adapted to any system. Regardless of how you do so, we hope that you enjoy exploring this world as much as we did imagining it.

Hearth & Blade is a strange rules chimera. Built primarily within the framework of the first edition of the Pathfinder Roleplaying Game, it also incorporates elements from the P6 Codex (which limits character progression to level six), and The Elephant in the Room: Feat Taxes in Pathfinder (which streamlines the game’s sprawling feat tree). By combining tried-and-tested homebrew rules with a number of exciting new changes, we have devised a low-magic, lore-driven roleplaying experience for players.

Instead of being a self-contained gamebook, Hearth & Blade is more like a “mod” or a “patch” for a digital game. While certain aspects of the Pathfinder Roleplaying Game have been changed drastically - perhaps most notably classes and feats - other sections only make small alterations or provide additional resources for game masters and players. The quickstart guide summarizes these changes in detail, while pointing readers toward later chapters that further flesh out Hearth & Blade’s rules. Our hope is that anyone who is familiar with Pathfinder should be able to navigate this document with ease.

Although Hearth & Blade proposes multifarious alterations to the base game, its rules are driven by a few key tenets. First, characters will never ascend to the “adventurer-gods” common in long-running campaigns. Progression is capped at 6th level and some of the most potent magic effects (such as teleport and resurrection) are entirely absent from the game. Second, classes and feats have been redesigned to make low-level play more rewarding for players. No longer does a character need three feats to go to the bathroom! Finally, the game’s rules are heavily inflected by Yavmir’s history and lore. This manifests in many ways, perhaps most prominently through the absence of alignment, the rarity of fire magic, and the adjustments made to bestiary monster types.

Although designed holistically, it is our hope that players both adopt and adapt rules to best serve their campaigns. Roleplaying games have always fostered improvisation, and this document provides a flexible scaffold for adventuring in Yavmir.

Hearth & Blade is published by Mammoth Island under the Open Game License version 1.0a Copyright 2000 Wizards of the Coast, Inc. Full details regarding product identity and open content can be found within the PDF itself.

Development of Hearth & Blade is mostly complete, although we may release further revisions to correct egregious mistakes and typos. Please comment below if you have any questions regarding content or presentation. 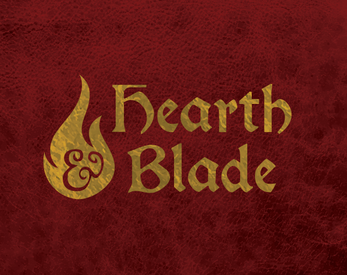